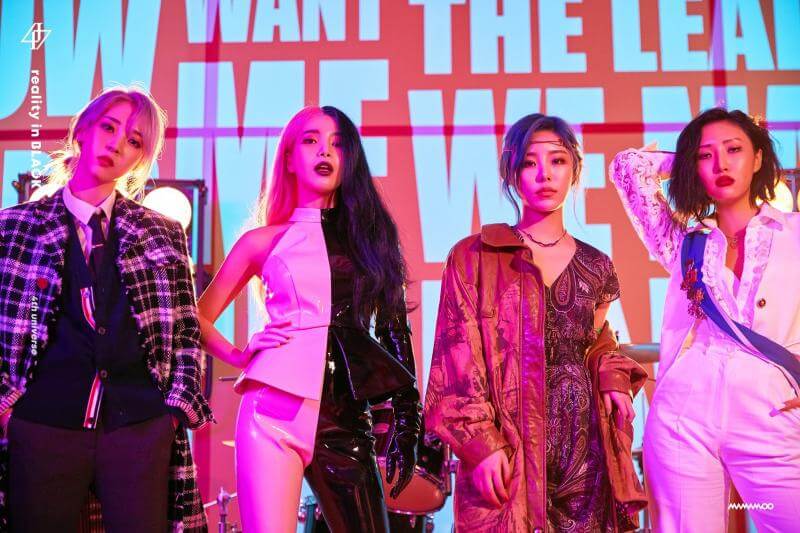 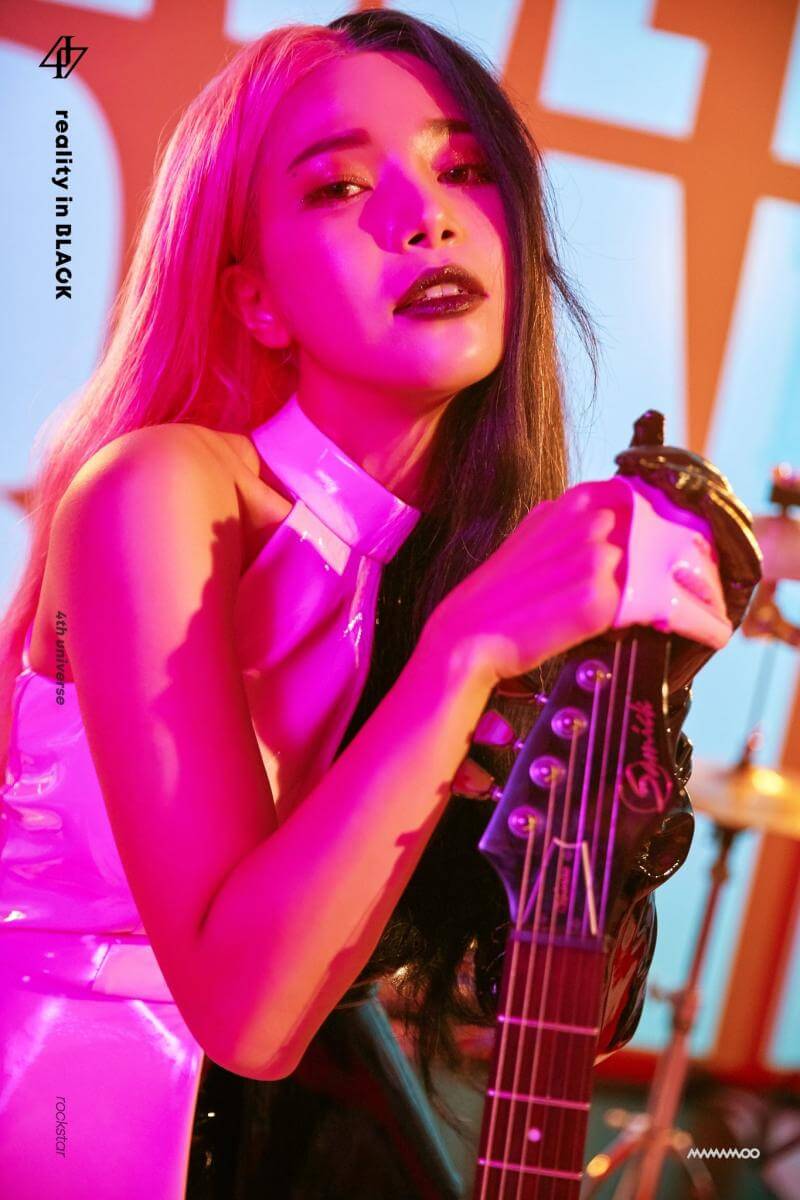 – She was born in Gangseo-gu, Seoul, South Korea.
– She has an older sister, Yong-hee.
– Education: Modern K Music Academy University
– She considers herself Mamamoo’s Mom.
– Is taking a Kumon language course in Japanese.
– Originally wanted to be a Flight Attendant.
– Was discovered by agency after singing for a free gift.
– Likes listening to Lil’ Wayne.
– Solar was on “We Got Married” where she was paired with Eric Nam.
– Solar appeared on “King of Masked Singer” as Sunflower.
– Solar created the official fan song for Moomoos.
– Solar can play the piano.
– Solar and Moonbyul aren’t good with roller coasters/high rides (Battle Trip)
– Solar wanted to be a tour guide in Korea for foreigners (Battle Trip)
– Solar ranked 36th on TC Candler “The 100 Most Beautiful Faces of 2018”.
– Solar is the only one in the group with no tattoos.
– Solar is close to Irene of Red Velvet and with Apink’s Chorong.
– Solar is Mamamoo’s scaredy-cat, due to her fear of ghosts. (MBC Every1’s Showtime Season 7, Ep.4)
– Solar collaborated with Luna of F(x) and Hani of EXID for “Honey Bee”, under Mystic Entertainment.
– According to Mamamoos japanese website she is considered to be the Main vocalist but Solar prefers to not refer herself as that
– MBTI type: INFJ-T
– Update: She used to share a room with Hwasa. (After Um Oh Ah Yeh era all of them moved out and now have their own places.)
– Solar’s ideal type: “I like Simon D sunbaenim. I like hip-hop and when he raps, he’s so impressive and cool…so I feel like we could do something good together…music wise!” 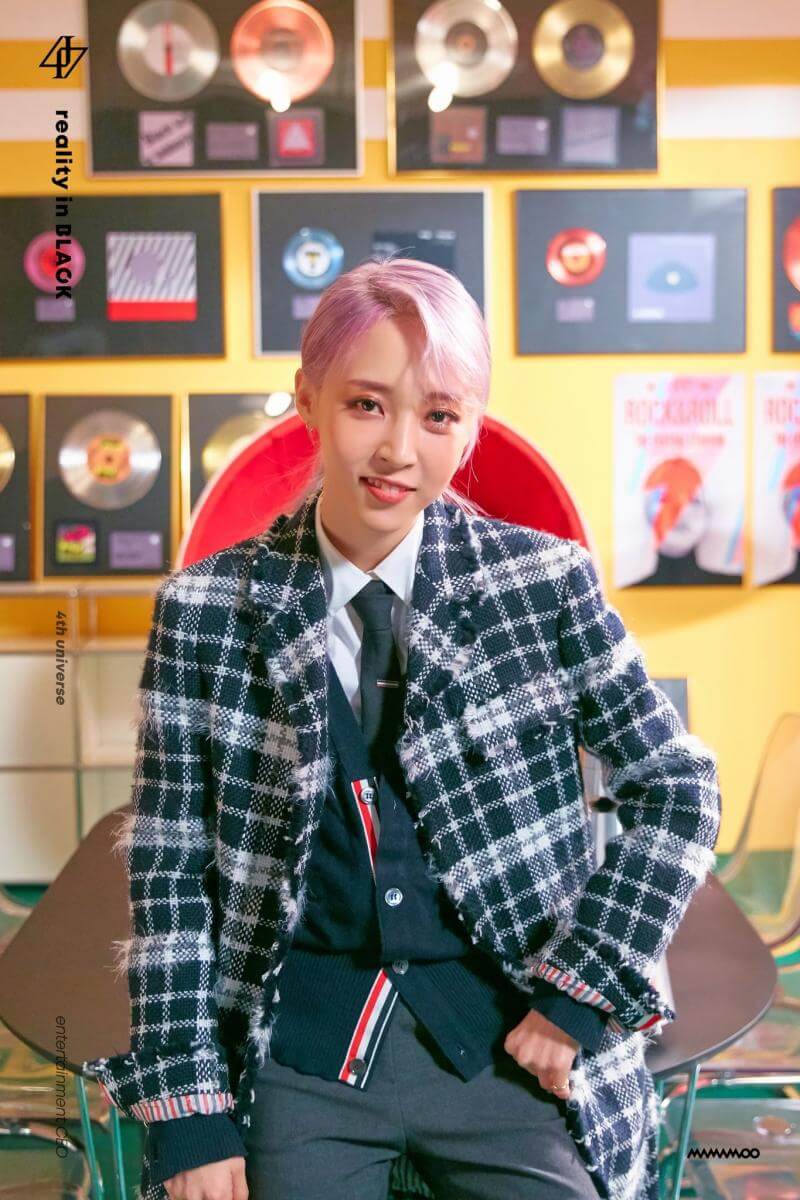 Moonbyul Facts:
– She was born in Bucheon, South Korea.
– She has 2 younger sisters (Moon Seulgi, born 1996 and Moon Yesol, born 2004).
– Moonbyul had originally auditioned to be a vocalist but changed to become a rapper instead.
– Received attention for resemblance to BTOB’s Minhyuk and EXO’s Xiumin. (Super Junior’s Eunhyuk considers her as “Xiumin in a wig”)
– Wrote her rap for “Piano Man” and helped write her rap for “Mr. Ambiguous” along with Hanhae of Phantom.
– She created the choreography for “Mr. Ambiguous”.
– Her nickname is “Black Hole” because she tends to sweat a lot.
– Wants to collaborate with Verbal Jint.
– When MAMAMOO participated in Immortal Songs, she wrote the rap parts by herself as they were not originally there.
– She owns a dog named Daebakie.
– Moonbyul and Solar aren’t good with roller coasters/high rides (Battle Trip)
– Moonbyul, along with Hani (EXID), Jin (BTS), Ken (VIXX) and Sandeul (B1A4), have a group chat for 92-liners.
– Moonbyul is close to Seulgi of Red Velvet.
– Moonbyul has 4 tattoos.
– Moonbyul appeared on “King of Masked Singer” as Swan.
– Moonbyul was in “Idol Drama Operation Team”, a TV program, alongside 6 other female idols. They created a 7 member girl group, called Girls Next Door , which debuted on July 14, 2017.
– MBTI type: ENFP
– Update: She used to share a room with Wheein. (After Um Oh Ah Yeh era all of them moved out and now have their own places.)
– Moonbyul’s ideal type: “I really like Gong Yoo sunbaenim. I sort of like dinosaur face-types and guys with broad shoulders, guys who can just grab and hug me in one go”. 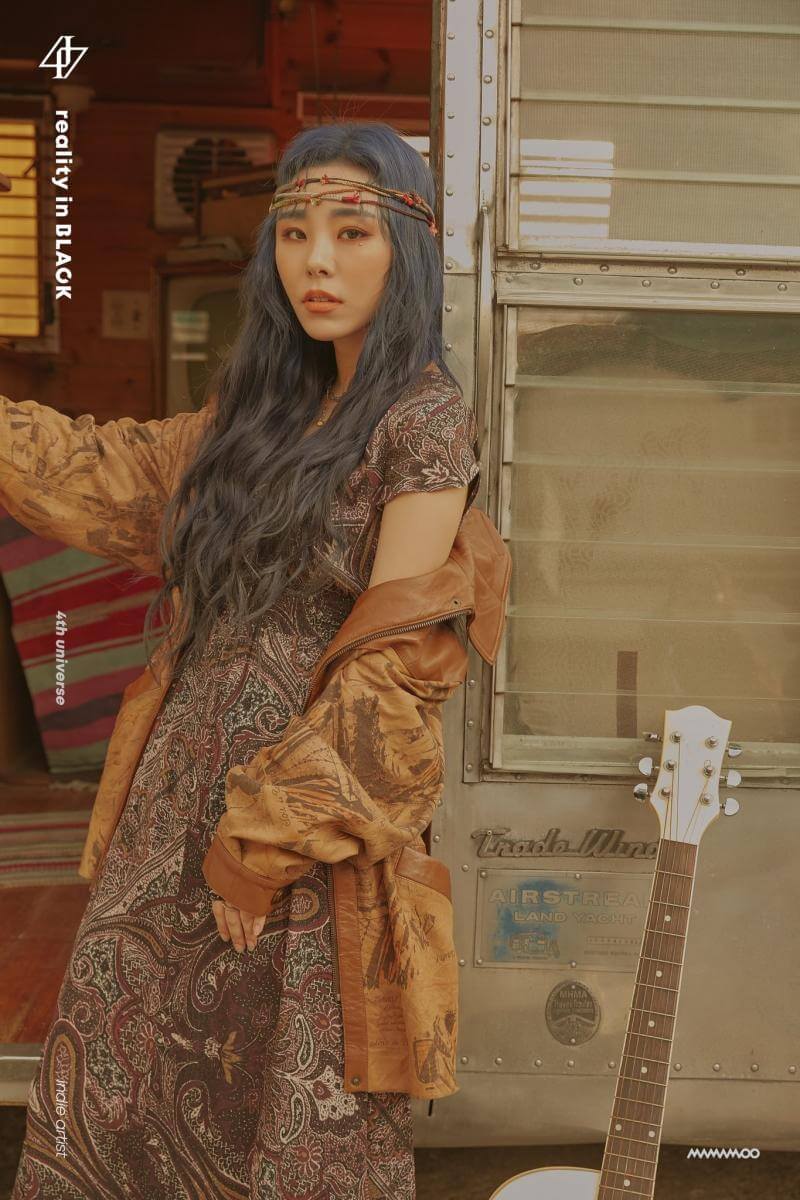 Wheein Facts:
– She was born in Jeonju, Jeollabuk-do, South Korea.
– She is an only child.
– Has known Hwa Sa since middle school
– Nicknamed “Jindo Dog” because of her resemblance to one.
– Has a huge crush on Beenzino.
– Likes watching mukbang shows (eating shows).
– Featured Vocalist in Phantom’s “Under Age’s Song”.
– Wheein appeared on “King of Masked Singer” as Half moon.
– Self-proclaimed “Snack Queen”.
– She likes to draw.
– She has a cat named Ggomo/Kkomo who has appeared in many of her photo and video diaries.
– Wheein has 6 tattoos (Wheein and Hwasa share two friendship tattoos).
– She is a former MBK Entertainment trainee.
– She is close to SONAMOO‘s Newsun and SEVENTEEN’s Vernon, they were spotted by fans hanging out together at Hongdae.
– She’s also close to Bigstar‘s Jude and IMFACT’s Taeho.
– MBTI type: INFJ-T
– Update: She used to share a room with Moonbyul. (After Um Oh Ah Yeh era all of them moved out and now have their own places.)
– Wheein’s ideal type: “I like Beenzino sunbaenim…but I mean he’s basically the ideal type for all girls in their 20s… so I didn’t want to say it, because it kind of hurts my pride! But yea, he’s my ideal type”. 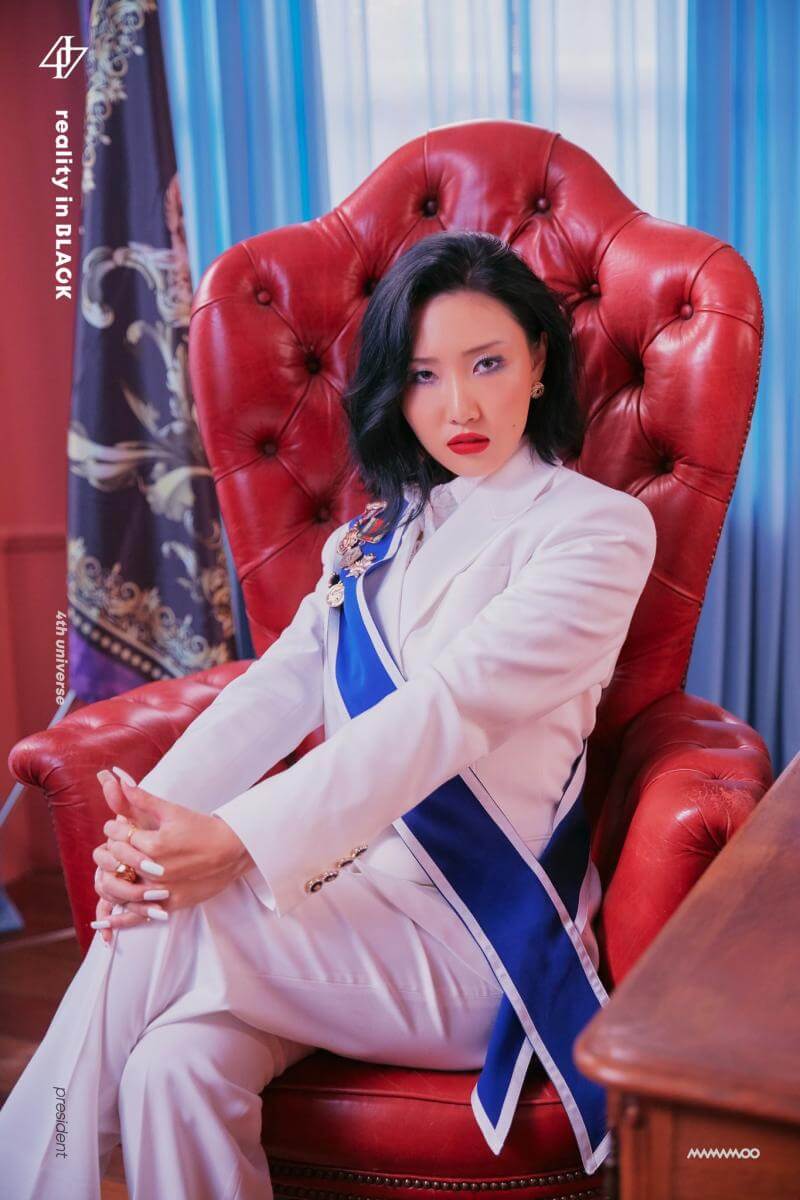 Hwasa Facts:
– She was born in Jeonju, Jeollabuk-do, South Korea.
– She has two elder sisters.
– Education: Wonkwang Information Arts High School
– Has known Wheein since middle school.
– Used to record guide vocals for 4Minute.
– Featured Vocalist in Phantom’s “Fingernail”, Baechigi’s “Boy Jump” and VRomance’s “SHE”.
– Wrote and Composed “My Heart/I Do Me” on Mamamoo’s first mini-album, “Hello”.
– Hwasa had also composed the song “Freakin Shoes” from their album “Pink Funky”.
– Hwasa appeared on “King of Masked Singer” as Aerobic Girl.
– Hwasa’s first love was her social studies teacher. During “You’re The Best” era, she was still in contact with him.
– Likes cooking so she’s Mamamoo’s cook.
– Likes listening to old Jazz Music.
– She LOVES Rihanna.
– Hwasa is allergic to animal fur.
– Because she can’t have a pet, she has a toy lion which she always references to whenever the other members talk about their pets.
– She was nominated for the “100 Most Beautiful Faces of 2018”.
– Hwasa featured in High 4-20’s HookGa.
– Hwasa has 5 tattoos (Wheein and Hwasa share two friendship tattoos)
– She’s a permanent member of the popular show “I Live Alone” as a celebrity panelist, alongside Henry Lau and Sung Hoon.
– Hwasa has also been on the show as a guest 4 times
– On February 13th 2019, Hwasa released her first solo song called TWIT (멍청이).
– Hwasa was named the Rookie Female of the Year in Variety in 2018 and won an MBC Ent. award for her work on “I Live Alone”.
– MBTI type: ENFP
– Update: She used to share a room with Solar. (After Um Oh Ah Yeh era all of them moved out and now have their own places.)
– Hwasa’s ideal type: “I like guys who are fatherly, so…Ryu Seung Ryong sunbaenim or if we’re talking about foreign celebrities, George Clooney…”

* NOTE: As you know, usually the K-pop companies adjust the idols’ official profiles, so it looks better. Fans compared their height to other idols’ height and approximated their real height. So, we posted both versions. MAMAMOO also doesn’t have official ‘lead’ or ‘visual’ roles anymore.

Note: Please don’t copy-paste the content of this page to other sites/places on the web. If you use info from our profile, please kindly put a link to this post. Thanks a lot!

Who is your MAMAMOO bias?

Backpacks, Belt Bags, Shoulder Bags or Totes? Which Is Best For You?

5 Ways to Liven Up Your Winter Wardrobe

Dermaflash: Get the Skin You’ve Always Dreamed of From the Comfort of Your Home